A Church Rich in History and Symbolism 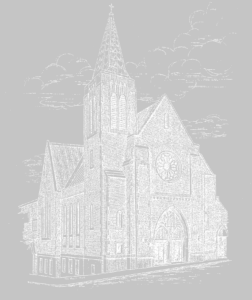 A BRIEF HISTORY
The history of Zion’s Lutheran Church is one that dates back to the middle of the 19th century. In December of 1847 a group of English-speaking Germans from First Lutheran Church wanted services in the “language of the market place.” Led by the Rev. John Rugan, the Assistant Pastor of First Lutheran Church, they developed their own congregation. Zion’s was born on January 16, 1848 and have had worshipped in various locations until their first building was built and dedicated at its present location in 1851. They worshipped in this structure until a fire destroyed it in 1877. A new building was erected on the same site and dedicated in 1879. Since then, the building has been renovated in the 1930’s, 1950’s and 1980’s. This includes the addition of a four-story education wing. The various renovations have seen the addition of numerous symbols that have given the narthex and nave its unique appearance. Throughout its 168 years Zion’s has been led by twenty-five different pastors.

One of the most significant figures in the history of Greensburg, Revolutionary War Colonel Christopher Truby, also played an important part in the Life of Zion’s Church. Colonel Truby was born in 1736 in Bucks County in eastern Pennsylvania. He married Isabella Bowman in 1760, and they moved to what is now Westmoreland County. He began to purchase land and became the principle land owner in the area. He and Isabella built their home in what is now Fort Allen. Through the years he deeded much of his land to others, including the property where Zion’s original building and current structure now stand.

Colonel Truby died in 1802, just five months after the death of his wife. They were buried in the old German Cemetary, which was located just south of the current City Hall building on South Main Street. Throughout the years the condition of the cemetery deteriorated, and families were forced to relocate their loved ones buried there. In 1938 the remains of Colonel Truby, Isabella and Pastor Michael Eyster, the second pastor of Zion’s, were reinterred in the crypts in the lower level of the church. Their gravestones are located in the wall just inside the Second Street entrance.

One of the most unique features of Zion’s church building is the variety of symbolism throughout the nave. This sets it apart from many of the church buildings in the greater Greensburg area. This rich symbolism represents the relationship of God with his people, as well as the history of its members and its relationship to the larger church.

Encompassing the altar and its setting for Word and Sacraments the chancel walls are fitting places to remind us of the source of our salvation, the death and resurrection of our Lord Jesus Christ.

The Map of Westmoreland County & the Eternal Lamp

This unique map on the chancel floor is of polished marble. The eternal light provides a vivid symbol of the universality and eternal presence of God in our time and place.

The Seven Last Words Spoken From The Cross
(left to right)

Chancel Archway Beam
This beam was hewn from a single tree by William Lenhart. The words, “I am the way, the truth, and the life,” from John 14:6, were carved into the beam by Jim Gregg in 1937.
Vocational Symbols in the Wainscot

A series of bas-relief plaques in the wainscot depict professions and occupations that have contributed to the development of the congregation and the community through the years.
(left wall) (right wall)
Blacksmith Clergyman
Woodsman Carpenter
Farmer Doctor
Railroader Lawyer
Teacher Iron Worker
Coal Miner Pioneer Mother
Grocer Civil Engineer

(The clay tiles above the wainscot right wall when facing the altar, front to back)

“In the Beginning God created the heavens and the earth.”
Hand and Nimbus
Serpent and the Globe
Flood
Tower of Babel
Scourge and Bricks – Slavery in Egypt; Exodus
Doorway – The Passover
Pentateuch – The Book of the Law
Cluster of Grapes
Fire and Ram in a Bush – Abraham and Isaac
Ladder – Jacob
Tablets of the Ten Commandments – Moses
Trumpet – Gideon
Lyre – David
Altar of Incense
Altar of Burnt Offering
Ark of the Covenant
Laver

The New Testament Wall
(The clay tiles above the wainscot left wall when facing the altar, front to back)
Unicorn – The Incarnation
Lily – The Annunciation
Messianic Rose – The Nativity
Pomegranate – The Epiphany
Shells with Drops of Water – Jesus’ Baptism
Palm Tree with Chi Rho (XP) – Palm Sunday
Cross and Palm Branches – The Atonement
The Phoenix – The Resurrection
Cross and Orb – Triumph over the World
Lamb and Banner – Lamb of God
Fish and IXOUS – Jesus Christ, Son of God, Savior
IHC within Sun – Jesus, Son of Righteous
Shepherd with Lamb – The Good Shepherd
Fleur-de-lis Christ, Human and Pure
Alpha and Omega – Beginning and End
XP – The “Chi-Rho” – Christ
INRI – “Jesus of Nazareth, King of the Jews”
IHC – Jesus
The Rear Wall
The rear wall presents symbols of the early Church Fathers, both Greek and Latin, along with Saint Paul and two Old Testament Prophets, Ezekiel and Daniel. (Look from left to right as you face the wall.)

St. Jerome – Cross Potent (pointed at base)
St. Paul – Open Bible and Sword, “Spiritus Gladius”
St. Basil the Great – Scroll with Greek Inscription
St. Athanasius – Bible between two Greek Columns
St. John Chrysostom – chalice standing upon a book
St. Ambrose – Beehive and Scourges
St. Gregory the Great – Bishop’s Staff
St. Augustine – Heart with heraldic flames pierced by two arrows
Ezekiel – Gateway with Turrets (Castellated Gateway)
Daniel – Ram with Four Horns
National Seals on Ceiling Beams
Lutheranism has been a vital force in the religious life of many countries. On the brackets supporting the ceiling beams above the nave are the hand painted coats of arms of twelve countries where the Lutheran Church has been an important influence. (Look from the front to the back of the nave.)
Front
(left wall) (right wall)
Germany The United States
Denmark Sweden
Norway Finland
Russia Poland
England Austria
Hungary Transvylvania

Floor Crosses
On the floor of all the aisles in the nave are the tiles of more than 270 variations of the Cross, the central symbol of Christianity. All of them are derived from the five basic forms.

The Latin or Roman Cross

The Greek (or square) Cross

The Hooked Cross (swastika or flyfoot)
Higher Education
The Lutheran Church has a rich history of establishing schools of higher education. On the floor at the entrance to the nave in the narthex are the insignias of the various colleges and universities that are or were once related to the Lutheran Church.